State IT Workforce Recruitment and Retention

The National Association of State Chief Information Officers (NASCIO) State IT Workforce: Facing Reality with Innovation on the current landscape of the state Information Technology (IT) workforce.

This report highlights the current landscape of the state IT workforce and lists innovative techniques state IT agencies are using to recruit and retain both entry level and highly skilled personnel.

When states were asked if they were having difficulty recruiting new employees to fill vacant IT positions, 86% said yes. This is a dramatic increase from the 2011 report where 54.8% responded yes. The majority of states also reported that it is taking 60-90 days to fill entry level IT positions and 3-5 months for senior level IT positions.

While the private sector has been aggressively recruiting IT candidates since the very beginning of the tech boom, state government agencies are now using the same methods, like building a talent pipeline to tap as IT positions open up to reduce the time necessary to fill critical positions. Looking at not only active IT candidates, but passive candidates as well.

When asked what attracts new IT employees to work for the state, benefits package (76%), job stability (72%) and pension/retirement plan (60%) were the top answers. These are typically the advantages that public sector jobs have over their private sector colleagues.

States have recovered from the 2008 recession, but tight budgets remain that limit the incentives that governments can offer to recruit and retain talented IT personnel. 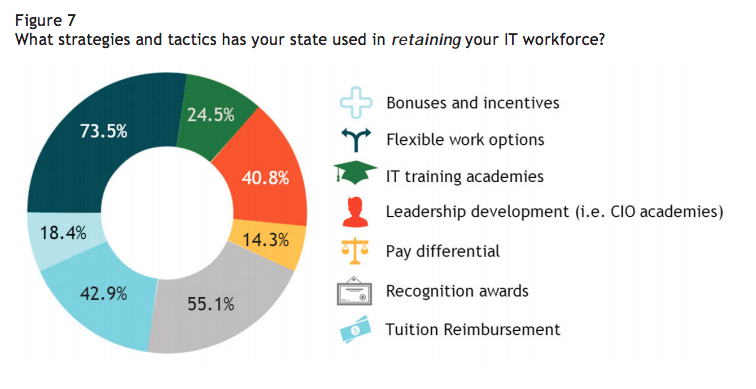 The report also focuses on the large number of state IT employees who are eligible for retirement or have been eligible, but postponed retirement due to the economic downturn. With the economy recovering, especially the recovery of the stock market/retirement funds, some states are experiencing record numbers of retirement.

For the first time in several years, “human resources/talent management” made NASCIO’s “Top Ten” list for 2015 of top priorities for state CIOs.

How will state government’s handling the shortage of IT personnel and new technology trends like cloud computing, software as a service (Saas), and cybersecurity? One way, outsourcing. While government unions frowned upon the practice, the struggle to hire government employees with the required skills is real and critical IT work only continues to grow as more and more government functions relay on technology infrastructure to deliver government services in an efficient manner.

Key highlights from “State IT Workforce: Facing Reality with Innovation” are:

For government agencies, GovtJobs can provide an employment tool that adds value to the government recruitment process by providing cost-effective, easily accessible, targeted, and timely hires.

GovtJobs match government job seekers with public sector employers. If you are looking to advertise a job opening or looking for employment in the public sector, GovtJobs is for you.